HDMI, the High Definition Multimedia Interface, was planned as the solution to all our hi-def interconnection problems; a single cable to carry high-definition video, high quality multichannel audio, and control codes.
The whole AV industry agreed on the standard, and manufacturers adopted it with enthusiasm. So what could possibly go wrong?

Lots of customers could answer that, as connection problems, hardware incompatibilities and confusing upgrades have blighted the progress of HDMI. The latest version, 1.4, was announced in March 2010 and is now commonly found on Blu-ray players and AV amplifiers, but will it finally solve our problems?

It’s a myth that as HDMI cables carry digital data in the form of a stream of 0s and 1s, they will all function flawlessly, all the time, regardless of cost or construction.

In fact, when you mix-and-match HDMI source devices, cables, accessories and displays from different manufacturers, it’s almost certain that you’ll hit trouble; and with the complex digital nature of HDMI, it can be impossible for consumers to resolve the issues.

“HDMI requires a completely new set of rules and different techniques for success,” he says. “We learned early on that HDMI had some reliability issues limiting its use. It was pretty obvious that while many products passed HDMI compliance testing, a high percentage were at the lower end of the performance scale.”

“Even high-priced products didn’t necessarily yield higher performance as the video bandwidth is so large, and dependence on control channels made the interface vulnerable.”

So what problems does HDMI regularly encounter? “Many problems have nothing to do with high-speed video,” says Jeff. “The majority are issues with I2C, the serial protocol used on the DDC line for EDID (Plug and Play) and HDCP (high Bandwidth Digital content Protection).

“I2C is slow, but very susceptible to stray capacitance issues from connectors, cables or anything the electrical bus is connected to. If capacitance gets to a critical point, it slows the signal ‘rise time’ needed for proper communication. You can have all the high-speed data bandwidth in the world, but without DDC, you’re dead in the water.”

Possible results are “failures such as no audio, no picture, pink screen or flashing – it has nothing to do with the high-speed data lines. The video can be perfect, but if the DDC line has rise-time issues, the unit will not pass HDCP, and no picture will be displayed.”

So how do you solve HDMI problems? “When you need to troubleshoot, the best tool of all is the old noggin,” says Jeff. “Once you have a solid understanding of the system, it becomes pretty easy. Shut everything down, restart the system with the connections in place, and watch the screen. If you see a notification of resolution, chances are the DDC line has communicated between source and destination.This is good!

“If you’re using an active product like a cable box or satellite box, try a DVD player instead. If the picture goes off when you think the program should have started, HDCP is not getting the proper key. This can be a cable or hardware issue.

“Try a shorter cable or another brand. ‘Sparkles on black areas say you have a video data transmission problem, in most cases cable related. Shortening will improve integrity greatly. You could also add cable EQ to the system.”
HDMI connection troubleshooting

“Flashes, no audio, or pink screen are usually caused by a bad DDC line. You have to eliminate all the good things to find the bad. Power up the system with all the HDMI cables connected, then try with shorter cables to see if the system works at all. If the system still fails to come on, use different inputs.

“Stray capacitance may be inherent in the hardware, so try a DDC line conditioner which can eliminate a lot of problems. ‘If the picture comes on, then goes off, it’s likely one of the video TMDS channels has a high bit error rate. Many times the picture comes back with tear lines through it.

“The second case is that the DDC line is just not quite making it, and HDCP is not getting a new refresh key. Here, replace the cable or make it shorter. If all else fails, again try conditioning.

“Cable testers check only for continuity, but there are some useful testers with status LEDs for power, hotplug detect, and DDC lines.”

Another possible source of HDMI problems is the +5V power line used to power the display’s DDC communication circuitry when it’s turned off. If this power supply is weakened, communication problems can occur. Some HDMI switchers, splitters and LED-illuminating cables take their power from this line, which is asking for trouble. 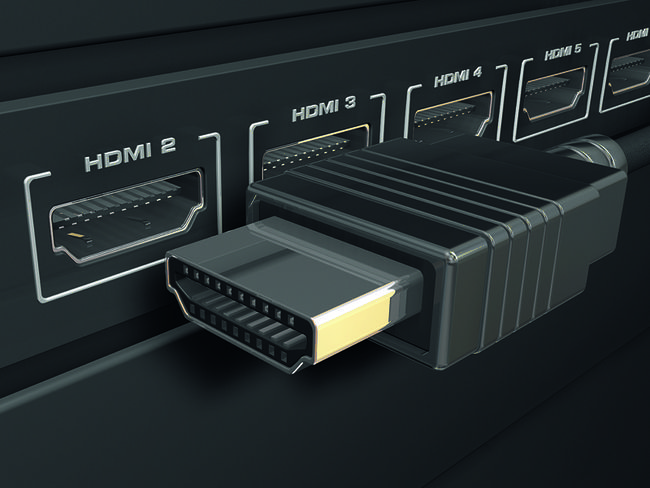 HDMI Pin 19, the hot Plug Detect, is 50 per cent shorter than the others, so tends to be the first to disconnect if the HDMI plug is loose.

Bear in mind too that HDMI cables don’t like being bent – signal timing is critical, so twists and turns can degrade performance, particularly over long distances. HDMI performance can also vary between different connections that are on the same device; often, due to quirks of circuit board design, one HDMI socket on a TV offers inferior performance to another.

The latest HDMI issues involve 3D. An HDMI v1.3 system should carry 3D video; but HDMI v1.3 amplifiers won’t pass 3D EDID information to a display. One solution is to have a Blu-ray player equipped with two HDMI outputs, one with v1.4 to connect directly to the display, the other with v1.3 to transmit sound to the amplifier.

Some early HDMI-equipped receivers had the HDMI board shoe-horned in near the transformer; as the device heated up, HDMI performance became glitchy.

Jeff tells us of one home cinema fan whose HDMI system failed regularly. No-one could identify the problem until an engineer realised that the family cat was sleeping on the amplifier, blocking the cooling fan, and the amp’s HDMI board was overheating. and Jeff’s solution? “Kill the cat!”

So take comfort from the fact that if you’ve had HDMI problems, you’re not alone; take our tips to heart, and you should be able to get it to perform perfectly, as its designers intended…